Sometimes it’s very good to be me. This is my story and I’m sticking to it.

In March of 2012 I bought concert tickets to see Bare Naked Ladies and Big Head Todd in the Last Summer on Earth tour. I looked forward to attending for nearly 6 months and in the end I cried and burned things.

Life ebbs and flows. The universe showered meteors this summer. During the same week a benevolent business relationship produced VIP tickets to Big Head Todd on the Maine State Pier. 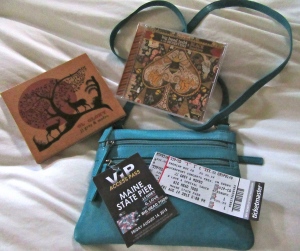 I had enough rewards on my credit card to pay for an overpriced room, across the street from the venue, with an expansive view of the harbor. For 4 hours I felt like I was young again. It was wonderful.

Free VIP tickets are delightful. The chairs are cushioned, the lounge is intimately spacious, the porta potties have no lines and, in one case no lock, and the musicians mingle, however briefly, with the lesser beings.

The illusion of infinite freedom is delicious. I wanted to take my credit cards and follow the band, to sit in a cushioned chair, seaside, on a perfectly clear August day, forever.

We all know that didn’t happen. I came home the following morning. I saw our local weather forecaster on the commuter bus. He was returning from Duke where he’s completing doctoral work. Our eyes met. When he saw me recognize him, he said “Hi”. I didn’t talk with him.
Instead, I spied on the reunion he had with his wife at the bus station. They were truly happy to see each other. It was touching to witness.
When he was in the men’s room, I talked with her and mentioned how consistently nice he is in public,  that along with appreciating it as a human being, it is gratifying to me as an advertiser. I can’t have people thinking I’m a creeping, stalker for no good reason.
I am an observer. I really am an advertiser too.
I told her that I hated to be intrusive, that it must be such an infringement to have strangers bearing down, everyone wanting your precious time. She was very happy to talk about him, to say what a sweet, genuine, person he is, and to tell me he’s finishing up at Duke. She loves him and she’s proud of him, it’s in her smiling eyes.

As I was getting ready to leave a young woman, working at the terminal, stopped me. “I’m so glad I saw you” she said. “This is my last week, I’ve taken a new job and I wanted to tell you.” I hugged her. I told her I was happy for her and we discussed the merits of her new position. I gave her some unsolicited advice- Everyone is new at one time or another. Don’t worry. New things make us all a little apprehensive just think of it as an adventure and you won’t be nervous anymore. I am SO proud of you!

I’d like to live a glamorous VIP life. Except I don’t want to be a VIP. I’d rather be me.

Equal Elroy, searching for the best answer.
View all posts by elroyjones →
This entry was posted in Uncategorized and tagged Big Head Todd, Experience, Happiness, Personal, Portland ME, Relationships. Bookmark the permalink.

4 Responses to Being VIP

Walking On The Abyss
One Million Excuses

Reasons why I'm not writing. And other stuff.

All you'll ever need, if you're only looking for stuff that's specifically here

what if the hokey-pokey IS what it's all about

So Far From Heaven

Too many reincarnations in a single lifetime to trust this one.

My life in an instant

Humor at the Speed of Life

A shift in perspective

Doug Story
Pouring My Art Out

Ripping out my guts for your entertainment

Every single story has a beginning at its end.

Making her way back to Neverland one day at a time...